The previous blog ended with Mr. Yoshida informing the project team of the locations of a number of shipwrecks, including two wooden ones. Could the Kanrin Maru be among them? We couldn’t wait to find out.

Eager to tell us more, Mr. Yoshida continued describing what he knows. One of the wooden wrecks was thought to be a Japanese traditional cargo vessel, probably late Edo-period (1602–1868). Not long ago, Mr. Yoshida told us, a four-armed anchor of a traditional Japanese form was found not far from this wreck’s location. However, the other wooden wreck was still a mystery. Now, while oral information is 100% trust-based and you therefore always have got to have some reservations when using this kind of information (no matter how legit that person’s story may seem), we couldn’t help but to feel some excitement already.

The wreck, as we were told, was found in a ditch, positioned perpendicular to the shoreline, was said to be approximately 15 metres long and 2¬3 metres wide. Now, while we know that the Kanrin Maru was at least 40.5 metres long and 8.5 metres wide, these rough measurements only tell us of the parts that were visible to Mr. Yoshida when he first saw the wreck back in 2010. There is of course a possibility that this wreck is simply a vessel of approximately 15 metres long and 2-3 metres wide, which would mean that it isn’t the Kanrin Maru. But, since Mr. Yoshida couldn’t tell what he was looking at (apart from its rough size and that it was made of wood), for all we know, parts of this wreck could at the time have already been eroded or washed away, spread over different locations or simply buried under layers of sediments, rendering it invisible for our informant. 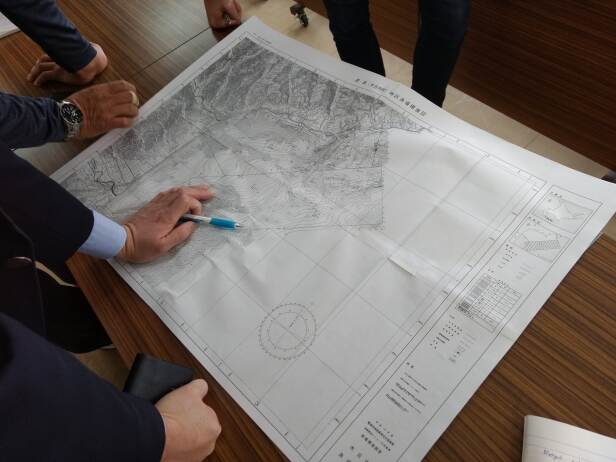 Discussing the situation of Saraki Misaki while looking at the map of the local fishing grounds.

Also important to learn was that the natural conditions of where the wreck site is supposed to be, seemed to be relatively positive for the preservation of wood. For while Saraki Misaki itself has a long staircase-like structure of rocks, our area in question consists of pebbles, gravels and sand. Wood covered by layers of sediments (sand in particular), depending on the thickness, grain-size and consistency of the sediments, can create oxygen-poor or even oxygen-free environments, which has the potential to slowdown the biological breakdown of organic materials to such an extent that even the wood of our 160-year-old target wreck would have a chance to survive.

One thing that did alert us however, was the very fact that our diver said he saw such a large area of wood uncovered (15 m by 2~3 m); which does not sound that well buried. Having that said, he also told us that the location had already been covered under sediments again when he later revisited the site. Mr. Yoshida posed that the cause of this sudden reveal could be the typhoons that reign the region in the months September to early November. Especially closer to shore, they can really stir up the sediments on the ocean’s floor. Another possibility is that it’s simply the workings of the tides, transporting and depositing sediments along the way. A careful study of the natural submarine environment is now planned and should complement the oral data. 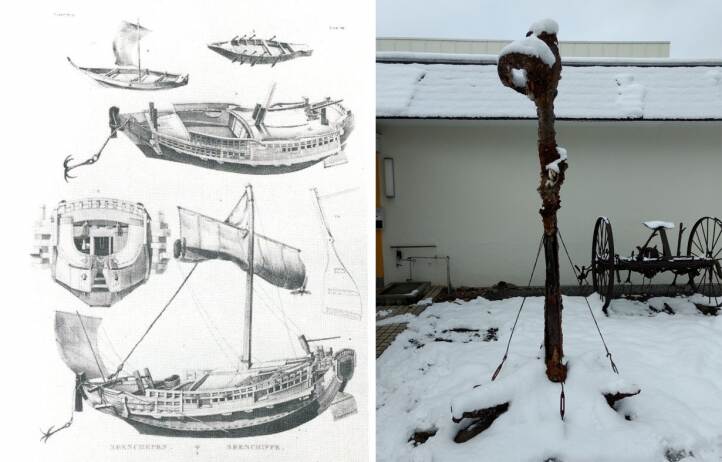 Left: An illustration showing below a Japanese coastal sailing vessel, as depicted in Von Siebold's Nippon (1897). Right: A Japanese four-armed (grapnel) iron anchor displayed outside (not the one found near Saraki Misaki).

All in all, we became quite the wiser from talking to Mr. Yoshida. However, does this information alone merit a search? Fortunately, we know of an anchor found near Saraki Misaki in 1984 which has been linked to the Kanrin Maru ever since it was found. With the news of an unknown wooden wreck in the back of our minds, we set out to view the already legendary anchor with our own eyes. You can read about our encounter with the anchor in the next blog.