The (hi)story of the Kanrin Maru shipwreck

The story of the Kanrin Maru begins in 1853. At the time, the shogunate (then ruling military government of Japan) ordered a number of warships from the Netherlands. The decision to turn to the Netherlands for this request was the result of a special bond between the Netherlands and Japan that took root all the way back in the 1600s.

For even when Japan had virtually closed its borders to the outside world between 1639 and 1853, the Dutch were the only westerners still allowed to trade with Japan. For more than two centuries, the Japanese had relied on the Dutch for bits of information regarding western worldviews, science, technology and more. And in all these years of relative isolation, Japan had no need for a naval force.

In fact, during this period, the shogunate forbade the Japanese from making overseas voyages on the penalty of death in an attempt to strictly control the influences from the outside world. So when in 1853 Commodore Perry (1794–1858) and his fleet of steam warships from the American Navy demanded the opening of the Japanese borders under the threat of force, the navy-less Japanese almost naturally turned to the Dutch for help. In order to fend for themselves, the Japanese wanted to build a navy of their own. While the Japanese also went to seek out other nations for help, the Dutch were keen to hold onto their centuries-old privileged position and quickly responded by given away a paddle-steamer called the Soembing in 1855 (later named the Kankō Maru, 観光丸). To wield this form of naval technology still foreign to the Japanese, the Dutch left behind a Marine Detachment led by G.C.C. Pels Rijcken (1810–1889) to educate and train the aspiring Japanese marines in the European naval tradition. These Dutch marines established the Nagasaki Naval Training Centre and used the Dutch language in their teachings; a language already studied by the Japanese since the 18th century.

The Kanrin Maru caught in stormy weather, photographic reproduction of a painting by Suzufuji Yūjirō

Image: Wikimedia Commons (the original can be found in the Yokohama Archives of History)

Meanwhile, construction began in the Netherlands to deliver Japan its first screw-propelled steam warship. Originally named the Japan, the Kanrin Maru was built between 1855 and 1856 on the shipyards of Fop Smit in Kinderdijk (a UNESCO World Heritage Site). It was equipped with steam machinery by the Nederlandsche Stoomboot Maatschappij in Rotterdam, armed with 12 cannons supplied by the Dutch Navy and brought to Japan in 1857. The Kanrin Maru was therefore actually the first of a number of ships specially built in the Netherlands for the shogunate.

On board the vessel was a second Marine Detachment led by W.J.C. Huyssen van Kattendyke (1816–1866) who were to relieve the first Detachment of their two-year duty. In the years that followed, the Kanrin Maru was used as a training vessel in all aspects of naval training. After the Dutch marines had left in 1859, the Japanese had to wield this western piece of technology virtually on their own. 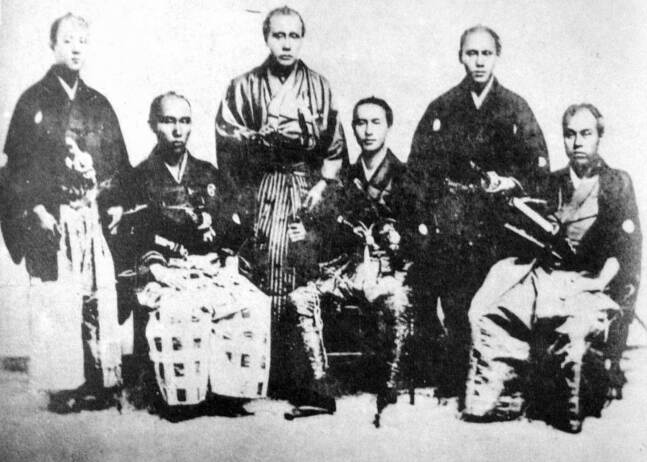 Captained by Katsu Kaishū (1823–1899), who is still an important historical figure in Japan today, the Kanrin Maru was successfully used in 1860 to cross the Pacific in a diplomatic mission to the United States of America. The symbolic and political importance of this mission was paramount, as the Japanese intended to show the world they were catching up on western technology while the mission ratified a treaty between the USA and Japan that further opened Japan’s doors to foreign trade. Even today the mission and the crewmembers involved are still commemorated in Japan, even to the extent that the descendants of the crewmembers on board during this particular mission have later formed the Society of the Kanrin Maru Crew Descendants.

The Kanrin Maru later served in the Boshin War (1868–1869) waged between forces who supported the ruling shogunate and forces who wanted to restore the Japanese Emperor to power, who long held only a symbolic role. In 1869 the ship was overtaken by Imperial forces, while the Boshin War ended not long after with the abolishment of the shogunate and the rise to power of Emperor Meiji (1852–1912; period of reign 1868–1912).

In its final years, the Kanrin Maru merely served as a transportation vessel, having been stripped of its machinery and cannons.  On 19 September 1871, while on a mission to colonise Hokkaido (the northern-most of four main islands that form Japan), the ship with 100 crewmembers and 400 civilians on board supposedly wrecked in a storm near Kikonai, Hokkaido. Almost everyone survived, but the ship was lost to the sea. A different, persistent take on how ship had wrecked however, is that the vessel was at the time captained by an American who in a drunken stupor ran the ship on a reef on a clear day. These and other related stories are just waiting to be revealed by the project team.