Research ‘Shipwrecks of The Roaring Forties’ on Beacon Island

The research within the ‘Shipwrecks of The Roaring Forties’ project continues with fieldwork from Nov 1st until Nov 11nd 2017 on Beacon Island, the location where the people of the Dutch East Indiaman (VOC) ship the Batavia stranded. A multidisciplinary team of archaeologists, geophysicists, visualization specialists, hydrologists and forensic anthropologists from Australia and the Netherlands will be working on recovering the remains of the camps of the survivors and the graves of the less fortunate. 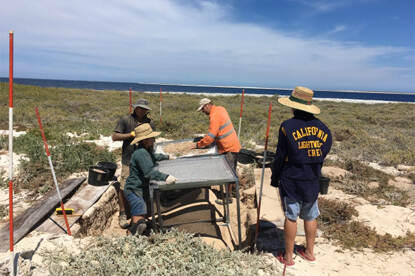 Beacon Island is the scene where a dramatic piece of Dutch history took place. In 1629 the Batavia stranded on a nearby reef. The majority of the 330 men on board stayed on Beacon Island. Within a  few months there was a mutiny and this group overpowered and terrorized the rest of the people. In the end, only one third of the people on board of the Batavia survived.

The archaeological remains consist mainly of traces of camps and graves. It is unclear how well these residues are preserved and to what degree they are threatened. The biggest threat seems to be the many birds breeding on the island and digging nests to half a meter deep.

The island is very remote, about 50 kilometers from the west coast of Australia. From the island, you can see the reef where the Batavia stranded. And occasionally, a little 400 years later, materials from the wrecksite reach the shore (pottery - photo).

We work in 2x2m small workpits that are taken out and sifted layer by layer. In previous years some graves were found with a total of 16 skeletons. But no traces of the campsite have been found. We hope to find them during this year’s research . Promising is a small stoneware jug found in one of the wells. The jug lies between recent bottles of beer, a toy car and many remains of bird eggs. Hopefully, traces of the campsite are still there to be found.

This blog was posted by Menno van der Heiden (RCE)