In an introduction, the Society told us they were established 20 years ago to emphasise the historical heritage of the Kanrin Maru and the special friendship it symbolises between Japan and the Netherlands, and to include that heritage in local tourism.

Just add up all the references to the Kanrin Maru in local artwork, tourism leaflets and posters and you already get a pretty good idea of the effort this Society has put in to promote the Kanrin Maru heritage. Over the past 20 years, the Society took their mission statement by heart, for starters by co-financing a tulip field on Saraki Misaki with a monument to commemorate the shipwreck (there’s even a small Dutch-looking windmill and a small replica of the Kanrin Maru!). The Society is a private organisation, consisting of locals but also people from outside the region, having about 300 members, of which 30-50 are active. 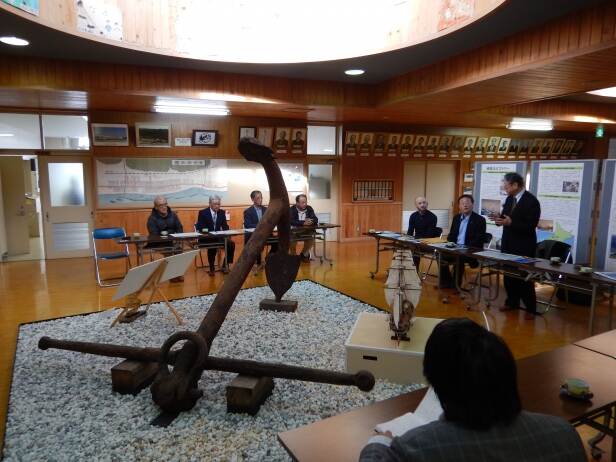 Meeting the 'Society of Dreaming About the Preservation of the Kanrin Maru' (represented by the four gentlemen on the left) and Mr. Goda (standing, right).

Some of the Society’s members are actually descendants of the first Japanese migrants who set foot on Hokkaido during its colonisation by the Japanese from 1869 and after. This requires an explanation. During the Edo-period (1602–1868; when the shogun or military leader of the Tokugawa-clan was still in power), Hokkaido was then called Ezo. At the time, Ezo was inhabited by the Ainu, an indigenous people who still live among the Japanese today. For centuries, the Japanese were just not that interested in the cold island, save for keeping some trading posts along the coast. But during the latter part of the Boshin War (1868–1869; a Japanese civil war between the forces supporting the shogunate versus the forces supporting the return to power of the Emperor), when the battle was nearing the end, Admiral Enomoto Takeaki (1836–1908) fled with the remainder of the shogunal fleet (including the Kanrin Maru) to Ezo where he established the short-lived ‘Republic of Ezo’. A final battle took place in 1869, and not long after Enomoto was defeated. From then on, the freshly-restored Imperial Government, under the reign of Emperor Meiji (1852–1912), took serious interest in Ezo. The government launched a mission to colonise the lands and renamed it into Hokkaido. For this mission, the Kanrin Maru was commissioned on what turned out to be its last mission. Having been stripped of its steam machinery and cannons, the ship was used to transport migrants and cargo to the lands in the north. And during this mission, the ship wrecked. 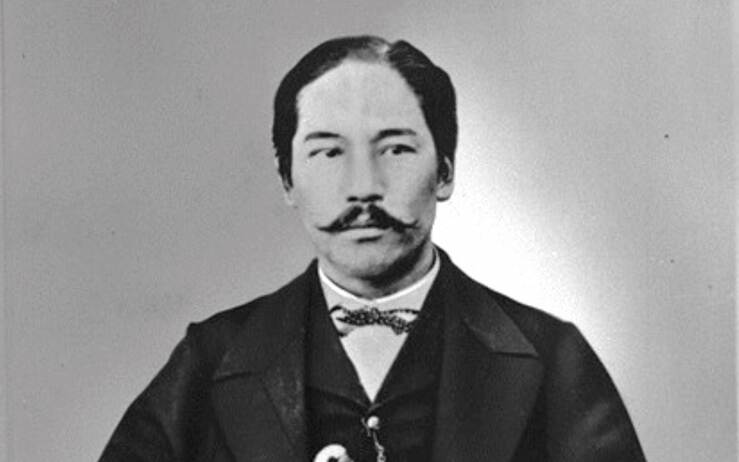 Back to our meeting. Mr. Goda explained to us how the historical documents written by Hokkaido officials seem to enshroud the shipwrecking event in mystery. First, there is an official source that states on 19 September 1871 that the Kanrin Maru had wrecked that day. Not a word is mentioned about the actual cause of the shipwreck.

Then all of a sudden, on the 20th of September 1871, Hokkaido officials write different stories, but all agree on one thing: A storm occurred on the 20th (so, not on the 19th), which pushed the Kanrin Maru on Saraki Misaki. One source then says the vessel was in bad shape, was brought back to Hakodate for repairs and then sailed back to Izumisawa to pick up the passengers, and continue its way to the Sapporo. A second source also says the vessel was brought to Hakodate, but was then deemed unrepairable and was subsequently demolished for scrap. And a third one mentions the vessel was actually sold to a private company. Now, as is said, contrary to the first report, the officials agreed a storm occurring on the 20th was the cause for the accident, and that the vessel did not sink. 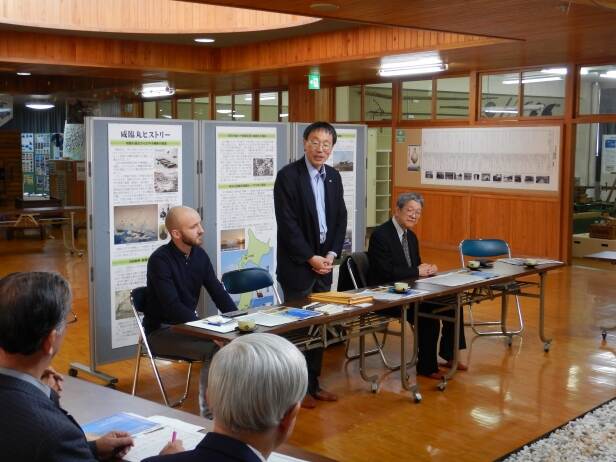 Prof. dr. Iwabuchi addressing the attendees of the meeting.

But then Mr. Goda found a private diary of a Hokkaido official who was a sober, diligent and hardworking man who never failed to note down in his diary the daily weather conditions, except for on the 19th and 20th of September 1871. On those particular days, the diary remains silent. Are these signs of misinformation to cover up the shipwreck of the Kanrin Maru? Mr. Goda thinks so. Mr. Goda believes that since the transport of migrants to Hokkaido was one of the earliest missions of the new Hokkaido government, plus the fact that the officials hired two unknown Americans, it could well be that the Kanrin Maru wrecked due to other, more embarrassing reasons than a storm - and that it did in fact sink. Mr. Goda suggest it was perhaps due to the incompetence of the unknown hired helps, or maybe even due to the drunkenness of the captain. Government property being repaired or sold at Hakodate sounds a lot more convenient than government property sinking to the bottom of the ocean, though, that’s for sure. Still, the team needs to look further into this matter as well to find out whether there is any ground for such a theory.