Shared history of Cuba and The Netherlands

The RCE’s Maritime Programme has been collaborating with the Cuban National Council for the Cultural Heritage (CNPC) since 2013. In 1994 Cuban divers retrieved archaeological objects from a site northwest of Cuba. The objects suggested that the site was Dutch. In 2010 Dutch journalist Esther van Gent made contact with Cuban archaeologist Dr. Ovidio Ortega Pereyra. They wrote a joint proposal to further investigate the site, with the help of the Maritime Programme.

The main aim of the project, entitled ‘The Dutch Presence in Cuban Waters’, was to investigate the Dutch presence in Cuban waters in the 17th century, and its impact on Cuba. Various methods were used: archive studies (in Cuban, Dutch and Spanish archives), archaeological research on salvaged objects (which include a tobacco box from 1698 with an image of Nieuwe Kerk church in Amsterdam), value assessments of two possibly Dutch wrecks and research into the forts built in Cuba to repel Dutch attacks.

The RCE and CNPC are equal partners, and both shared final responsibility for the study. This does not however mean that they also performed all the activities. Several other partners were actively involved, both in Cuba and in the Netherlands. Research was performed on the two sites in July 2014. The results were presented in October during 2014 the Dutch Cuban Cultural week in Havanna. 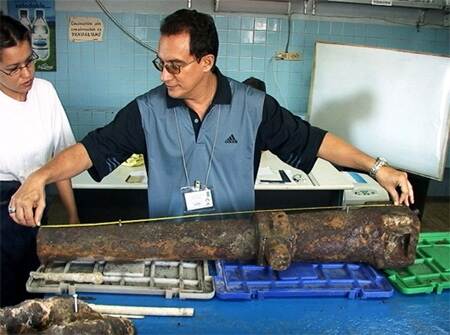